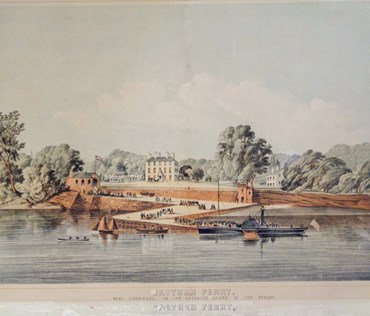 Of course, significant and popular p[laces of entertainment served the public all over Merseyside. One of the most popular though, was at Eastham on the Wirral coast of the Mersey.

Eastham is quite an ancient Wirral village, nestling on the banks of the Mersey halfway down the Wirral Peninsula, and overlooking south Liverpool. From the beginning of the 19th century though, Eastham suddenly took on an important new role as a transport junction for those making journeys between Liverpool and Chester. This was in the days before the railways and better road communications.

Before this time, to get to Chestier from Liverpool travellers had to take the ferry to Birkenhead at Woodside. Then there would be a long and uncomfortable coach journey, on a very poor and often unsafe road, all the way down the Wirral to the ancient Roman city. But, in 1815, a new steam ferry opened from Liverpool directly to Eastham now cutting the journey time considerably.

It had been the monks of Chester Abbey who first began a ferry service from Eastham to Liverpool, possible as early as the 12th century. This was mentioned in the Domesday Book and, by 1509, it was known as ‘Job's Ferry’, and later as ‘Carlett's Ferry’. This was powered by a combination of sail and rowing and, depending on the river conditions, it could take hours to get across the Mersey.

In 1816, the very fast (for the times) paddle steamer, ‘Princess Charlotte’, was brought into service. This now cut travel time even more.

The Eastham Steam Ferry was a lucrative source of income for its owner, Sir William Massey Stanley (1807-1863), who also owned a large estate of land surrounding the ferry landing point. However, the importance of the ferry route across the Mersey began to decline, in 1833, when the renowned civil engineer, Thomas Brassey (1805-1870), opened his New Chester Road from Birkenhead to Chester. This was well-constructed and maintained, which now meant that with a fast stagecoach the journey to Chester was much quicker than travelling via the Eastham ferry.

When, in 1840, the Chester to Birkenhead Railway opened this provided an even quicker journey time, so business for the ferry declined even further. Because of this, and in a bid to replace lost revenue, in 1846, Sir William built the luxurious Eastham Ferry Hotel close to his ferry pier. This replaced a much less impressive older building. Stanley believed that this would encourage new visitors to Eastham either by coach or ferry, but it was not enough. So, the following year he finally sold the estate, ferry, and hotel to Richard Naylor, a Liverpool merchant. The new owner decided to develop Eastham as a pleasure garden to revive the fortunes of the ferry and his new property.

Naylor built a fairground and planted extensive flower gardens, including rhododendron walks and ornamental trees. There were also fountains and secluded glades for private canoodling and troth-plighting! He also provided band concerts, hobby horses, and a water chute. The investment paid off and the Gardens became very popular and highly profitable. In 1874, a new iron pier was built for the ferry boats, and by this time Eastham had become known as the ‘Richmond of the Mersey’ (after the town by the Thames).

Famous performers and entertainers appeared at the ‘Eastham Ferry Gardens’, including Charles Blondin (Jean Francis Gravelier) (1824-1897), the famous Niagara Falls tightrope Walker. He was sixty years old when he came to the Pleasure Gardens for a three week engagement. This was at Easter, in 1884, and he insisted on performing his death-defying feats, 75 feet above the ground, even though a very strong wind was blowing. The crowds below the high-wire on which he was precariously balanced pleaded with him to, “Come down sir! Come down, in the name of God!” Blondin simply ignored them, stood upright, blindfolded himself, and put a sack over his head. Even though the strong wind had now become a gale he completed his walk without incident, to the enthusiastic cheers and applause of the relieved spectators.

There was also a large Menagerie and Zoological Garden in the pleasure grounds, with a bear pit, lions, tigers, antelopes, seals, a monkey house, and an aviary. Although, many people had never seen anything like this before and one middle-aged man was seen fleeing from the zoo screaming in terror at the sight of the exotic and frightening creatures.

Interestingly, George Mottershead (1894-1978), who founded Chester Zoo in the 1930s, is said to have witnessed a keeper’s cruelty to an elephant in the Ferry Gardens Zoo, which made him determined to ensure that the welfare of his own animals would be his top priority at his own new zoo.

Entrance to the Gardens cost 3d. and this gave access to all the entertainments. To get into the grounds visitors had to pass underneath the Jubilee Arch. This very ornate structure had originally been erected in London Road, Liverpool, for Queen Victoria's visit to the City in her Jubilee year of 1897. Once the arch had served its purpose it was sold, at a knock-down price, to the then owners of the Gardens where it then became their ‘formal’ gateway and ticket office.

Eastham attracted thousands of visitors from Liverpool and across the Wirral every week. In fact, during 1908 alone, 111,202 people visited the Gardens. There was now also Fred Brook's Vaudeville & Circus Co., a Pierrot theatre, a large ballroom, sideshows, tea rooms, an open-air stage, and a boating lake; so there was something for everyone.

In 1909, the first 'loop-the-loop' roller-coaster ride in Britain transferred from Crystal Palace in London to Eastham. Known as the ‘Flip-Flap’, or ‘The Topsy-Turvy Railway’, this could reach an estimated speed of 95mph. However, it proved too scary for the public and stood idle for many years before being demolished.

Unfortunately the popularity of the pleasure grounds became their downfall and they became somewhat seedy and, “common and not for families”. Visitor numbers declined and, in 1925, the ferry service was discontinued. Now with very few visitors, in 1929, Eastham Ferry Gardens were closed and, in 1935, the ferry pier was dismantled. When this service ended it also marked the end of paddle steamers on the Mersey.

The site of the old gardens is now Eastham Country Park. The Eastham Ferry Hotel still services visitors and, with pleasant walks through the woods, the excellent views across the river, and the fascinating remnants and relics from the old Ferry Gardens, this is still a popular destination for Merseysiders.