The Mass Graves of Old Swan 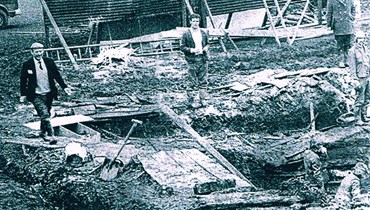 Even today, Government and other official authorities and agencies deny that this event, in 1973, ever took place. This is despite many people who are still prepared to come forward and attest to its authenticity, and the very limited photographic evidence. Decide for yourself what you think ...

In the suburban district of Old Swan, to the east of Liverpool town centre, stands the beautiful Roman Catholic Church of St Oswald. Designed by Augustus Welby Pugin (1812-1852), it opened in 1842, and was the first Catholic Church in the North of England, since the Reformation, to have been built with a tower and spire. It is also in St Oswald’s that the first Roman Catholic Bishop of Liverpool, Bishop George Brown (1784–1856), is buried.

In the autumn of 1973, work began on excavating a plot of open land next to the church. This was to lay the foundations for new infant and junior schools, to be attached to the church and to bear its name. However, just as digging was about to commence, the parish priest at that time, Father McCartney, warned the foreman that there might be some unmarked graves at one end of the site. So, before any more work could take place, the Home Secretary had to sign an exhumation order. Then the mechanical diggers moved in.

With great care they began moving earth and, sure enough, an unmarked coffin was discovered, at a depth of around 15 feet (5 metres), soon followed by another one. With the greatest of respect, the workmen laid these side-by-side, as digging continued. Then, another coffin was dug up, and another, and another, as the digging process was now speeded up. In fact, and to the amazement of everyone on-site, and in an area of only around forty square yards, a total of 3,561 coffins were eventually laid out, in rows, on the building site.

In fact, they were now being laid out above ground just as neatly and orderly as they had been buried beneath it, except that they had originally been interred up to sixteen coffins deep in places! This seemed to indicate that the burials had taken place as a single operation, but Father McCartney was as surprised as the workmen were. He had known anecdotally of one or two unmarked graves, but knew nothing else about them at all. There were no written records of the burials in the church archives, and certainly not of over 3,000 people!

I have heard one story, although how true it is I cannot say, that at one point during the hurried process of exhumation events took a particularly ghastly turn. It seems that as the coffins were being hauled up out of the ground, the perfectly preserved corpse of a young woman tumbled out of one of them. It was raining, and the ground was a muddy quagmire. The woman’s body slid into the mud but, almost as soon as it did, her previously clear features began to disintegrate, as did the rest of her body. This horrified the men digging up the bodies, but it became worse as the rain got into more of the coffins. These now broke open too, emptying more decomposing and disintegrating cadavers in the mud, all around the horrified workmen. I have no information about how they dealt with this truly unpleasant turn of events.

Naturally, as soon as the first bodies had been discovered the Liverpool City Coroner had been informed. But now came an urgent instruction, directly from the Home Office, to enclose the entire site with a 10-feet-high secure fence, with a locked gate. The site manager was also instructed that this was to be regarded as a restricted area, and that no members of the public should be allowed on site. However, the exhumations were allowed to continue.

By this time though, the press had got wind of the gruesome find, but they suddenly found themselves the subject of a D-Notice from the Government, preventing them from publishing any stories or pictures about the ‘Old Swan Mass Grave’.

Soon after the instruction to erect the fence, another edict came from the Home Office, this time ordering the immediate cremation of the coffins and their contents, followed by the interment of the remains in an unmarked site in nearby Anfield Cemetery. These instructions were carried out with great haste. Work on the new St Oswald’s Schools was halted for eighteen months whilst a complete pall of silence descended over the site and the story. Nevertheless, speculation was rife (although not in public) about the origins of the bodies, the circumstances of the peoples’ deaths, and the reason for such a mass, unmarked burial pit.

As none of the coffins bore name-plates, one belief was that this indicated that the burial dated before 1840. This was because it was only after that date that registration of burials became compulsory and all coffins had to be identified. But this still left many questions unanswered.

Could these unfortunate people have been victims of the grisly Black Death, or Bubonic Plague, which had ravaged Britain, and especially Liverpool, throughout the Middle Ages, and especially throughout the 17th century? This was unlikely, as plague victims’ bodies were simply dumped, without coffins, in mass pits and covered with quicklime before being buried. Could they have been poor people from the Victorian slums of Liverpool, who had died in one of the many later plagues of the Town, such as Cholera, Typhoid, or Dysentery? If so, why are there no records of such an exceptional burial in the City Records Office?

Why were the Home Office so intent on hushing up the story and so determined to destroy the evidence so quickly, especially before any post-mortems or samples could be taken for analysis and possible identification? The fact that all the coffins had been buried in such a methodical and orderly a manner showed that this had been a highly organised process. This implies the likely involvement of military personnel in the burials. Speculation continued, but soon life moved on. The schools were eventually built, and they are still open and happily serving the local community and parish to this day.

However, the story got a new lease of life, in 1995, when some local historians contacted the Home Office for information about the burial pit. Even after over twenty years, a spokesperson for the Government denied all knowledge of the case, and said that, as they had no records of the ‘alleged mass grave’, it was likely that this was all an invention of opportunist sensationalists or over-imaginative local people. But, as there had been so many people present and involved at the time, this position taken by the Home Office had no validity.

To date, the Government still denies the existence of any records. Naturally, no detailed press reports exist, and I have only been able to trace one, very poor photograph of the grave site.

Perhaps a more likely explanation is that these people had been Irish Famine migrants to Liverpool, in the mid-1840s, who had been so weakened by starvation that they easily fell victim to Victorian epidemic disease. Being only ‘peasants’, perhaps the Victorian authorities of the time simply buried them out of the way, and saw no need to record either their identities, or the fact of their interment.

Perhaps the reason for the subsequent official denials and obstruction is due to the politically sensitive nature of the times in which the bodies were discovered. During the 1970s, tensions between Britain and Irish Nationalists were at such a bloody peak that bombs and other terrorist atrocities seemed to be happening virtually every week, both in Northern Ireland and on the British mainland. For the government of the day to admit that Irish people had been treated with such disrespect, even though a hundred years previously, would have provoked outrage amongst the Irish community with potentially violent consequences, if indeed this was the truth behind the mass grave of course. But this is simply my own speculation, for, as I have said, no official records exist.

Nevertheless, whatever the explanation may be for these anonymous burials, it is only right that we spare a kindly and respectful thought for those 3,561 unknown people, in their unmarked graves, and in their equally uncertain final resting place. 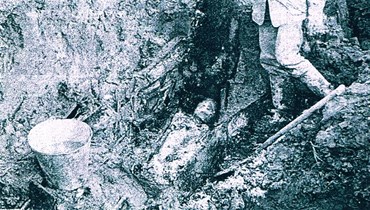