The Punch and Judy People of Merseyside 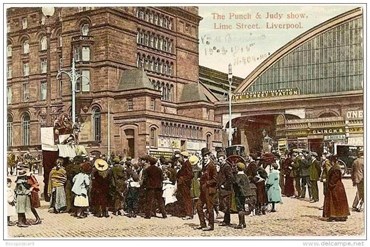 Many of us remember the days when the Punch and Judy Show regularly performed, up to the 1970s, at the junction of St John's Lane and Lime Street. Others will remember it when it moved to Williamson Square, and then later, in the Albert Dock. Who were the 'Punch and Judy People'? What is their story?

Richard Codman was born in 1832, in Norwich, of Romany origin, and was taught the skills of woodcarving, music, and puppetry by his father, George (1811-1892). As a young man Richard wanted to explore the country and so he travelled to the northwest, via Birmingham and Wales, giving shows with puppets and dogs at markets and fairs along the way.

By 1860, he had arrived in Llandudno, where he collected driftwood from the shore, and which he then carved into a set of traditional Punch and Judy Show characters. Many of these are still owned by his descendants.

Right away Richard began giving puppet shows on the beach, under the banner  ‘Professor Codman’s Wooden Headed Follies’ and, from that time, the family have regularly performed their Puppet Shows at this Welsh seaside resort.

Records tell that the Punch and Judy show first appeared in Britain after the Restoration of King Charles II, in the 17th century, when the country wanted fun and frolic again after decades of misery under Cromwell and the Puritans.

The comic story had evolved from the tale of ‘Punchinello’, which originated with the medieval, Italian, ‘Comedia del Arte’ street theatre troupes. Soon, travelling puppet shows became quite feature of the British way of life. Originally using string puppets, called marionettes, the characters evolved into the much more practical and portable glove puppet characters that we know today, because this was much easier for itinerant, single showmen.

Richard too used glove puppets and, by 1868, he had made his way to the very important port and town of Liverpool. Here, he immediately approached the Corporation for permission to give public shows. They were delighted by the idea of a traditional Punch and Judy show in their town so they granted him a performers’ license. They also gave him a permanent pitch on ‘The Quadrant’. This was in the middle of Lime Street, at St George's Place, directly opposite the front of Lime Street Station.

Richard Codman died in 1909, by which time his son, Richard Codman II, born in 1870, had taken over the family business. By the 1920s the show had become so popular, and such a feature of Liverpool life, that a new puppet booth was hand-carved by the famous local sculptor, H Tyson Smith. This new, miniature theatre was formally presented to Richard, in 1922, by the Sandon Studios Society. This was at a special ceremony held in The Bluecoat Chambers Arts Centre and the Codman family continue to use this booth today.

When Lime Street was redeveloped, in 1957, the Codman’s magnificently ornate, colourfully dressed and painted puppet theatre booth was re-sited to stand on St George's Plateau. The frame, with its proscenium arch, was left on the plateau between performances and it was never vandalised!

By the late 1960s, traffic around St George's Hall was so busy that it became dangerous for crowds of people to cross to the Plateau to watch the shows. The Council then moved the Punch and Judy show to a new regular pitch, in Williamson Square, with the theatre booth then stored in the nearby Playhouse Theatre. This was a highly appropriate association, as the large theatre and the very small one had both continued to play an important role in Liverpool's cultural heritage.

The Codman family had used the same, traditional script for their show since first coming to Liverpool, just changing some characters and topics to suit the times and contemporary ways of life. This included a puppet version of Ken Dodd, saying “how tickled he was”, and “how tatifalarious” it was to be there!

As a boy in the late 1950s, I watched the Punch and Judy show often, and got to know the storyline well; which was actually very violent. It featured wife-beating; baby-battering; an incompetent and violent Policeman; a hanging; a haunting; and an encounter with the Devil! Still; all good, clean, family fun!

The plot of the show had been significantly de-brutalised though, by the beginning of the 1970s, but the performances were still exciting, unusual, lively, and very, very funny. There was the popular “Look Out he’s behind you!” scene, with the ghost. This always provoked enthusiastic audience participation from both adults and children.

There was also the mischievous ‘Joey the Clown’ who was the only character who managed to outwit wily Mister Punch. He was based on the very famous, real-life Victorian Clown, Joseph Grimaldi (1778-1837).

But a highlight of any performance was Mister Punch’s encounter with the crocodile. The reptile was determined to eat Mister Punch, who simply reached down the monster’s throat and pulled out a long string of sausages, loudly squeaking, “That’s the way to do it!” in triumph.

The uniquely distinctive voice of Mister Punch is a cross between a squeak and a growl. This is produced by the use of a ‘swazzle’. This flat, round, miniature kazoo is placed at the back of the puppeteer’s throat and is only ever used for the voice of Mister Punch. It has risks attached though, because if the puppeteer is not skilled in its use he can either swallow it or choke: Very unpleasant in either case.

Punch always has a stick of course; representing the ‘slapstick’ of traditional travelling street performers and Victorian Music Hall artists. This was two strips of wood tied together at just one end, so that even when struck against somebody very lightly it would produce a very loud ‘smacking’ sound, making the blow appear much worse than it actually was.

During every performance, sitting placidly at the end of the stage, or ‘playboard’, sat ‘Toby’ the dog, who had also been a traditional character in Punch and Judy Shows since early Victorian times. Each incarnation of the very much alive animal was trained to sit very still, wearing a brightly-coloured ruff around his neck, and interacting with Mister Punch as part of the performance.

Richard Codman II died in 1951, the year of my birth, when Richard Codman III, who had been born in 1897, then took over the ‘Punch and Judy’ mantle. He was the ‘Professor’ who entertained my parents, my brother and me, and the rest of the City and Merseyside throughout much of the second half of the 20th century. When he died, in 1985, I was particularly saddened.

This was because I had got to know him very well from my boyhood, and he had fuelled my own interest in glove puppetry. He had also advised me on the design and building of my own Punch and Judy theatre booth; and had helped me set up my first, part-time business, as a teenaged travelling puppeteer.

Richard’s son, Ronald Richard, was born in 1928 and he became the next Professor Codman, supported by his cousin Robert. It was Ronald Richard who entertained my own children over the years. When both Ronald Richard and Robert died, in 2015, they were the last Punch and Judy men to perform in Liverpool. However, a branch of their family still perform ‘Codman’s Punch and Judy Show’ on the seafront at Llandudno.

One of the Liverpool family’s first proscenium arches, and some of their puppets, are now on display in The Museum of Liverpool at Mann Island ~ a permanent reminder of just how important to our history and cultural heritage were ‘The Punch and Judy People’ of Merseyside. 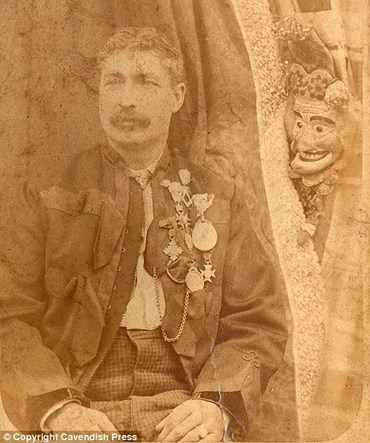