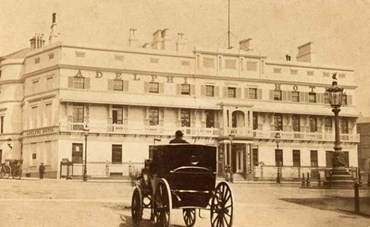 Three hotels named 'Adelphi' have stood on the site overlooking Ranelagh Place in Liverpool, including the present building. This is their story ...

At the beginning of the 19th century, part of what was the site of Ranelagh Gardens, a famous and exclusive area of enclosed, landscaped pleasure gardens, was bought by an entrepreneur by the name of James Radley who, in 1826, built and opened the Adelphi Hotel. Standing at the junction of Copperas Hill and Brownlow Hill, overlooking Ranelagh Place, this opulent building provided the highest standards of accommodation and dining. Radley designed it to serve the rapidly developing stage-coach trade, and it quickly became the premier hotel in the Town,

With the rapid development of the railways, throughout the 1830s and 1840s, and the opening of the main-line terminus station at Lime Street, in 1836, there was now a new breed of wealthy traveller. So, to keep pace with their demands for superb accommodation, and to again cater for their wealth and social status, the original hotel was demolished in 1886, and was replaced by an entirely new Adelphi Hotel, on the same site. That same year the hotel published its own ‘Adelphi Hotel Guide to Liverpool’, in which it also took the opportunity to prominently advertise its own, even more luxurious facilities.

The table d’hôte dinner, served in the marble-pillared dining room, consisted of ‘soup, entree, joint and sweets etc. vegetables and cheese’, and cost of 6/-. One of the most popular and renowned soups served in the hotel, but only from the à la carte menu, was the Adelphi’s own turtle soup. Considered a true delicacy, and extremely expensive, hotel chefs prepared this themselves, fresh, every day, from their own live turtles!

In the basement of the hotel, in large specially-constructed aquarium tanks, were kept between 150 to 250 edible turtles. These were imported directly to the hotel from the West Indies and the Gulf of Mexico, and then killed and turned into soup in the Adelphi’s on-site, purpose-built, turtle slaughterhouse! The resulting product was also bottled at the hotel and then sold throughout the country, as well as on the Continent and in the United States, and the Adelphi advertised it particularly as being ‘a suitable food for invalids’.

In 1892, the hotel was bought by the Midland Railway Company but, by the early years of the 20th century it was clear to them that, once again, the demands of its clientele had once again outgrown the existing building. So, this too was demolished and, in 1914, the company opened what is the current Adelphi Hotel. This quickly became internationally renowned as being one of the most luxurious hotels in Britain, now servicing not only rail passengers, but also those wealthy travellers taking trips on the great ocean-going liners, and it accommodated them in opulent surroundings.

The hotel has a large foyer and, at the top of a flight of marble steps, a grand saloon in which, in earlier times, a Palm Court string orchestra would play as guests took afternoon tea. This splendid building was designed by Frank Atkinson, who also designed and decorated the interiors of some of the world’s greatest passenger ships, and the Selfridges Store in London. The Sefton Suite in the hotel is an exact replica of the First Class Smoking Lounge on RMS ‘Titanic’.

Because of this, the interior of the hotel is often used as a film and television set, but especially when scenes are required on board the first-class decks of historic passenger ships. Amongst many other productions the Adelphi was a location for the 1981 Granada Television production of ‘Brideshead Revisited’. It was also the location for scenes from the 1997 James Cameron film, ‘Titanic’, as well as for ‘A Night To Remember’, which was an earlier film about the great shipping tragedy, produced in 1958.

Some of the world’s wealthiest people have stayed at the Adelphi, including royalty and the aristocracy, politicians, and famous stars of stage and screen: Such people as American President Franklin Roosevelt with his wife Eleanor, Winston Churchill, Bing Crosby, Charlton Heston, Laurel and Hardy, Frank Sinatra, and Judy Garland.

In 1954, the famous Cowboy Film Star, Roy Rogers, once rode his equally famous horse, Trigger, up the steps of the hotel, then up its staircases and along its corridors, to appear at an upper-front balcony where they both received the applause and cheers of the crowds standing in the street below. All grand hotels are the scene of such curious incidents, scandals, and significant events, and it was whilst he was a guest at the Adelphi, in the early 1970s, that the Russian classical musician Vladimir Ashkenazy announced his defection to the West. However, these were to be the final glory days of the Adelphi as a truly deluxe hotel, catering for the glitterati and intelligentsia of Liverpool and the world.

I have very fond memories of the building, and of its highly-professional staff when, as a young man in the late 1960s, I would enjoy cocktails with my ‘Bohemian’ friends, in the outstanding Cocktail Bar. I would dine out too, in style, in the lavish hotel restaurant, and sample with relish the range and quality of its extensive, and expensive, wine list. Sadly though, and with the almost total decline of Liverpool itself during the 1970s and 1980s, the hotel became neglected and shabby, and its reputation suffered badly.

However, and just as Liverpool fought back to regain its ‘world class’ status, this too was the ambition of the modern Adelphi. It is a Grade II Listed building and, although it remains only a shadow of its former days of elegance and extravagance, it retains all of its original features. The building has 402 bedrooms and these, together with all of its public areas, were refurbished in 2008 when Liverpool became the European Capital of Culture, at a cost £15million. However, in the last decade this process slowed down, and now seems to have stopped altogether. It will now need substantial capital investment, which is unlikely in the present economic clkimate. It is only to be hoped that, one day, the Adelphi Hotel will reclaim its international status as one of Britain’s ‘Grand Hotels’. 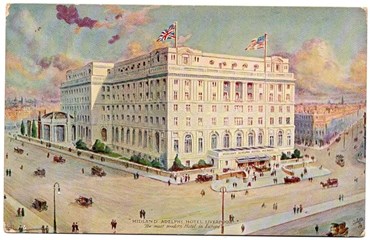